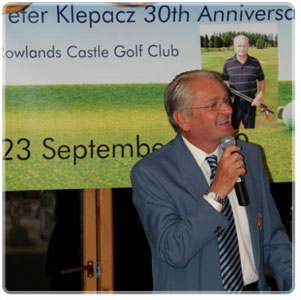 Peter is the longest serving professional in the clubs’s history, having started at Rowlands Castle in 1980. In this time he has built a very good reputation locally not only for teaching, but also for his knowledge of golf equipment and custom fitting.

Peter has been a PGA professional for 40 years, having qualified in 1970 and was one of the 1st professionals to complete the PGA training course.

Having been a relatively late starter to golf, first starting to play at the age of 16 his progression was rapid receiving his first official handicap of 8, and progressing as low as +5 before turning pro.

He started his professional career at Guildford golf club, where he was assistant to the renouned club maker Tom Turner, who trained peter to be an established club maker in his own right.

During his early career, although the tournament structure in the 1970’s was much different from todays, he did enjoy some success on a national level, and to supplement his playing would often work on the local fruit and Veg market or painting fire engines for Denis’s in Guildford.

After Guildford, Peter moved to Moor place in Esher, where he worked with the renowned teacher Patrick Tallack, which is where his passion for teaching started. Also working alongside him at Moor Place was Vivian Saunders, who was the British open ladies champion and went on to be a renowned teacher and author. After Moor Place he moved to develop his teaching knowledge further, moving to work with the legendary John Jacobs at Sandown park, in surrey. After only 18 months at Sandown Park, he became the youngest club professional in the country taking the professionals job at Ampfield in Hampshire. During his spell at Ampfield he played in a number of big European tour events including the Martini International at Wentworth, the Benson and Hedges International and the Coca-Cola World Young Professional Championship.

In 1980 Peter took up his current position at Rowlands Castle golf Club. Peter Lives in Rowlands Castle with his wife of 34 years Anne. They have two children, Naomi the eldest, and Jimmy who works with him in the business. Outside of Golf, Peter is a keen gardener, and is an allotment holder in the village. He supports local football, and although a Chelsea fan at heart, he has held season tickets at Fratton Park, and also Havant and Waterlooville FC.