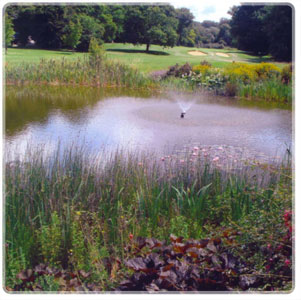 The course is regarded as one of the best in the area, and is not only picturesque, but also a good test of golf, and playable all year round.

The Club was formed in 1902 with an initial subscription of two guineas to cover two year membership.

Initially the course consisted of 9 holes but in February 1922 an extra 9 holes were added to a redesigned layout.

In 1973 a purchase of extra land led to the extending of the course to its present layout and length. Two major pro-ams in the mid ‘70’s saw such luminaries as Open and US Open Champion Tony Jacklin and a young Malcolm Gregson who set the current course record of 66.

In 1906 the first permanent Club House was constructed for just under five hundred pounds. A minor extension was added in 1908 and a major extension in 1929.

A major rebuild was conducted in 1993 with the Pro Shop and out buildings being added in 1996, giving the buildings that are seen today.

The course appears benign at first glance but an Amateur record of 68 set in 2001 proves that reappraisal awaits the golfer who takes it too lightly.